Property Predictions For 2020 And Beyond

Some experts are forecasting doom and gloom for our property markets in 2020, while others expect moderate growth, and a few are even predicting booms. Property market analyst John Lindeman gives us his take on what lies ahead for our housing markets.

Past performance does not accurately predict the future, because history never repeats itself. The past can however, give us some useful insights into how the property market works and what causes prices and rents to change.

This is because the performance of our property markets has been anything but consistent over the first two decades of the current millennium, even though we have experienced regular economic and population growth over the same time.

We experienced a decade of property market speculation during 2000 to 2009 followed by ten years of property hesitation from 2010 to 2019 and knowing the causes of those changes can help us predict where our property markets are heading in the new era of regulation.

A decade of property market speculation

Back in 2000 investors greeted the new millennium with optimism and speculative property investing quickly became all the rage. With high price growth dramatically moving from one area to the next, it seemed that all investors had to do was guess which market would be next to boom, as the graph shows:

Sydney’s house price doubled in just a few years, while Hobart’s increased by 50% in one year alone. As Australia’s housing prices doubled from 2000 to 2009, leading experts confidently explained that this was how the market always performed. Theories such as the housing market cycle, the property clock and the ripple effect were born in those heady days, trotted out to explain why growth would always continue.

It all came to a sudden halt when the GFC arrived and the mining boom ended, taking many speculative investments down with them. Prices crashed in many formerly booming markets, and when property investors returned to the market after 2009, they did so with caution and carefully avoided areas that had been tainted by the mining boom years.

A decade of property market hesitation

Investors turned their attention to secure and reliable property markets, such as our biggest two cities and as growth returned to these areas, they were joined by more local and overseas investors, so that during 2014/15, over 60% of all properties purchased in Sydney and Melbourne were bought by investors.

As prices soared, APRA intervened by placing limits on investment housing finance. which stopped the investor market dead in its tracks and housing prices in Sydney and Melbourne started falling until the controls were removed again.

On the other hand, cities not effected by either mining or investor booms, such as Hobart and Canberra have experienced moderate but consistent price growth over the last decade. The graph shows how property prices have moved in each of our capital city markets over the last ten years, with the Sydney and Melbourne investor created price bubble and correction being quite prominent. 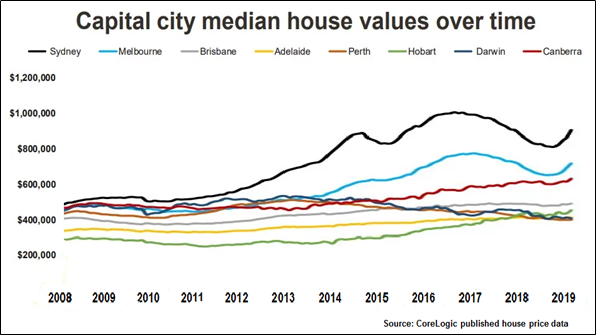 It seemed that no one quite knew what the results of their actions would be, and so the decade was marked by hesitation. Investors hesitated before deciding to buy only in Sydney and Melbourne, the government hesitated in holding a Banking Royal Commission, APRA hesitated in enforcing its powers to reduce property investor borrowings. However, these events are now behind us and we have entered a new era – one controlled by the regulators.

A decade of property market regulation

What lies ahead for our property markets? Firstly, we can be sure that there will be greater regulation. The Sydney and Melbourne experience demonstrated to APRA that investors can cause housing market booms, and that APRA can control such booms. If APRA uses the same investor trip wires that it did in 2014, the following events will launch them into corrective action:

We do know that having flexed its powers once, APRA may do so again more quickly in future and so the years of really big investor generated housing booms are probably all behind us.

APRA is not alone, because State Governments have fiddled with stamp duty to try and discourage foreign property investors while encouraging first home buyers, and the Federal Government has yet to enact the various recommendations made by the Banking Royal Commission.

We can sure of greater regulation as a result. Governments and regulators are excellent at protecting us from the last disaster we have experienced, so how these interventions and controls will work in future is anyone’s guess. Hopefully, property market performance will be more regular and reliable.

In any event, borrowing conditions for property investors are now back to where they were in 2017, so the losses suffered in the Sydney and Melbourne markets since then will be fully recovered during 2020.

The recent bush fire disasters will impact tourism and holiday destinations for some time, and also convince many downsizing retirees to relocate to well-appointed and located units in their own cities rather than move to sea and tree change retirement destinations. The result will be good price growth in top end medium and high-density urban unit markets.

Housing demand will continue to grow in the big three cites, with overseas migration being the biggest source of new households. This will create more rental demand for high density inner urban units and first house buyer demand in outer suburban areas.

The possibility of recession

The wild card is the possibility of a recession. Many things will change if the country slips into recession during 2020, but the demand for housing won’t alter, because we all need a place to live. What might change is the nature of the demand, with more aspiring first home buyers forced to rent and buyer demand slowing. Because our population is always increasing, this means that rents will increase rather than prices and rental yields will start to rise.

The government will pull out all stops to prevent a recession, and one way they can do this is by massively increasing spending on infrastructure such as roads, railways, water supplies and renewable energy projects. The really successful property investors of the next decade will be those who have purchased properties in areas about to enjoy the benefits of such projects, as these areas will be largely protected from any economic downturns.

John Lindeman is the In-Depth columnist for Your Investment Property Magazine and a popular contributor to property related media. John also authored the landmark best-selling books for property investors, Mastering the Australian Housing Market and Unlocking the Property Market, both published by Wileys. Visit www.lindemanreports.com.au

This article has been republished from Properbuyer.com.au, click here to view original article.

Please consult your advisor for specific recommendations.  This general advice does not take into account the client’s objectives, financial situation or needs as we do not and cannot provide personal advice.  Any views written about in this article are the views of the author who has no holdings in those companies or investments mentioned in this article.